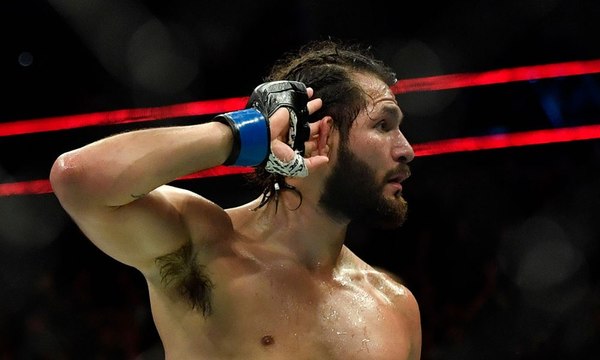 After being on the wrong end of a brutal knockout against Kamaru Usman in his welterweight title rematch with Kamaru Usman this past weekend at UFC 261, Jorge Masvidal has clapped back at his ‘groupies’ Colby Covington and Leon Edwards, but said he’s down to fighting Nick Diaz.

Speaking to ESPN (as transcribed by MMA Fighting) a day after his loss, Masvidal said that he’s open to fighting Diaz, who was in attendance at UFC 261 and has been teasing a return to the Octagon.

“Definitely, Nick is a stud,” Masvidal said. “If Nick wants to throw down I’m more than willing to throw down. Like I said, I’m going to do it on my time, I’m not taking short notice fights, no matter who it is. I’m not going to do that right now. But, if Nick does want to fight towards the end of this year, what can I say, I’m here.”

The Miami native battered Nate Diaz to win the BMF title at UFC 244, and he thinks Nick coming back to avenge his younger brother’s loss would be a great storyline.

“You want to do right for your brother? Let’s go,” Masvidal said. “I heard a lot of interviews that he wasn’t too keen on what I did to his little brother. Neither would I. I feel for Nick in that situation. I know what I’d wanna do if somebody did that to my little brother. So, let’s go.”

Covington and Edwards were quick to rub salt into Masvidal’s wounds after UFC 261. Not that he was surprised.

Masvidal plans to fight one more time before the end of this year, and has several interesting options, including Covington and Edwards. He has also been called out by Khamzat Chimaev, who’s eyeing a return to the Octagon in August.

Who would you rather see Jorge Masvidal fight next, Nick Diaz, Colby Covington, Leon Edwards or Khamzat Chimaev?