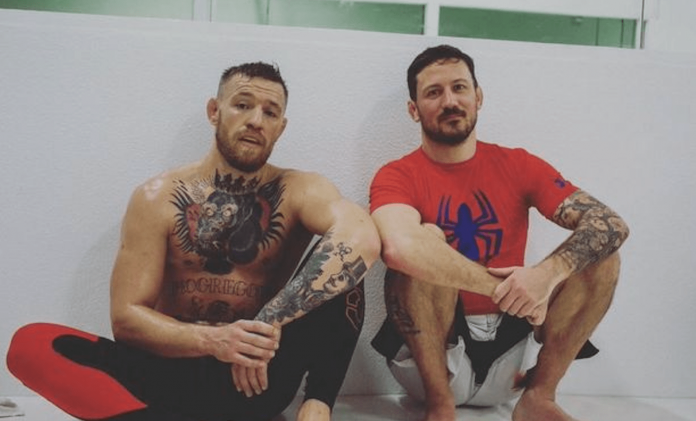 Conor McGregor suffered the most devastating loss of his professional MMA career against Dustin Poirier at UFC 257.

Poirier stopped McGregor with a barrage of punches in round two, but most of the talk has been about the devastating calf kicks, that were the game changer this past weekend.

McGregor’s coaching team has come under fire for his failure to check the leg kicks, and over his admission that he has never experienced something similar in training sessions.

Speaking to ESPN (as transcribed by MMA Junkie) however, John Kavanagh said that although dealing with calf kicks was part of their training, the technique is almost impossible to replicate in the gym.

“He does so much sparring that you hope that there’s not going to be ring rust, because he’s getting the rounds in,” Kavanagh said. “But again, somewhat ironically, this particular technique is one that is almost impossible to replicate.

“The fact that Dustin threw it is not that surprising. It was certainly part of our training, to deal with leg kicks. How devastating a technique it was somewhat caught us out. In the gym, when you’re throwing that technique, you’re not trying to kick your partner as hard as you possibly can, and you’re also wearing shin pads, kick pads. … You can build up a false confidence – ‘I feel it, but it’s not that bad.’ Then it’s only in fighting that you get tiny gloves and no shin pads.”

Kavanagh also pointed out that McGregor has only fought for 40 seconds inside the Octagon since October 2018, which came in his win against ‘Cowboy’ Cerrone at UFC 246, which played a part in his defeat.

“From October 2018, coming up two-and-a-half years almost, he had 40 seconds of feeling what kicks feel like with no pads on and punches with four-ounce gloves,” Kavanagh pointed out. “So yeah, that is one thing you cannot replicate.”

The SBG Ireland head coach believes everything was going well before the stoppage, as McGregor was landing some good shots, and showed no signs of tiredness at the end of the first round. However, the “pesky” calf kicks changed everything.

“I took a lot of positivity from it,” Kavanagh shared. “He’s clearly not feeling even the beginning of tiredness. I felt at the end of round one, this is probably going to be a long fight, because he landed a couple of shots. I thought there was once or twice where Dustin wobbled a little bit, so the finish would come, but let’s not chase it. Let’s not get too over-excited, and if we’re going to be doing three, four, five rounds, it’s nice to see at the end of round one that he doesn’t even have to sit down.

“I thought by the end of round one, that’s kind of it now for takedowns. Now it’s a kickboxing battle, and [from] the shots I saw from round one, Conor got the better of him. So, going into the second I thought, energy’s great, probably takedown attempts are if not over, Conor’s very switched on [to them]. … So we’re going to start going into a nice kickboxing battle, and Conor’s one of the best in the world at that. But then those damn, pesky, peroneal nerve kicks.”

Why Calf Kicks Are So Effective

Calf kicks have begun gaining popularity in MMA during the past few years. They are highly effective, and there’s no widespread defence to counter them. Kavanagh explains why this technique requires only a few clean strikes to cause decisive damage.

“It’s one of those techniques that really two or three, maybe maximum four proper, clean connections, and that’s it,” Kavanagh noted. “If anybody’s experienced cracking your elbow and you hit that funny nerve – that electric shock you get is similar. It’s nerve damage rather than like a sore muscle or a body shot, or something you can get through, you know? You just can’t.

“It’s on or it’s off. The bottom half of the leg is off, and when [McGregor] kind of slipped the shot and Dustin caught him with a nice uppercut, he went to transfer his body weight onto the right leg, and it just gave [way], and he just went down, and that was the end of that. So we definitely have to fix that.”

Kavanagh believes McGregor did a great job in almost every aspect of the fight, but if and when they get another shot at Poirier down the road, they are going to be better prepared.

“We’re, as usual, an obsessive personality,” Kavanagh said. “Because it was over before lunchtime, we had the day together to talk about it. We had discussed [low kicks] in the training camp. Like I said, [we were] not surprised by the kicks being thrown, but very surprised by the effectiveness of the technique. So we will add it to our arsenal.

“I thought we did well in pretty much every other part of the fight. I would have loved to have seen a couple more rounds, some grappling exchanges and some more punches back and forward, because he needs more time in the cage. What did we get? Seven-and-a-half minutes in that fight? So we’re racking up the minutes. I hope there’s a lot more minutes this year.”

What do you make of John Kavanagh’s assessments of the UFC 257 main event between Conor McGregor and Dustin Poirier?