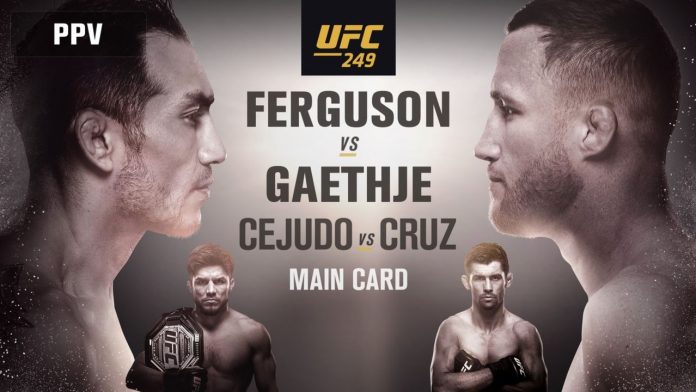 The UFC finally returned tonight with the stacked UFC 249 card. The promotion’s first card in almost two months went down behind closed doors at the VyStar Veterans Memorial Arena in Jacksonville, Florida.

Justin Gaethje stole the show at UFC 249, stopping Tony Ferguson in the fifth round. ‘The Highlight’ is now the interim lightweight champion and will face Khabib Nurmagomedov later in the year in a unification bout.

The UFC 249 co-main event will see Henry Cejudo defended his bantamweight tile against Dominick Cruz, stopping the former champion with two seconds left of the second round. Immediately after the win, ‘Triple C’ announced his retirement from the sport.

Ahead of the night, Jeremy Stephens missed the featherweight limit by 4.5lbs ahead of his clash with Calvin Kattar and ‘Jacare’ Souza was removed from the card and his fight with Uriah Hall, after he tested positive for the coronavirus.


The UFC returns on Wednesday the 13th in Jacksonville, headlined by Anthony Smith vs Glover Teixeira.