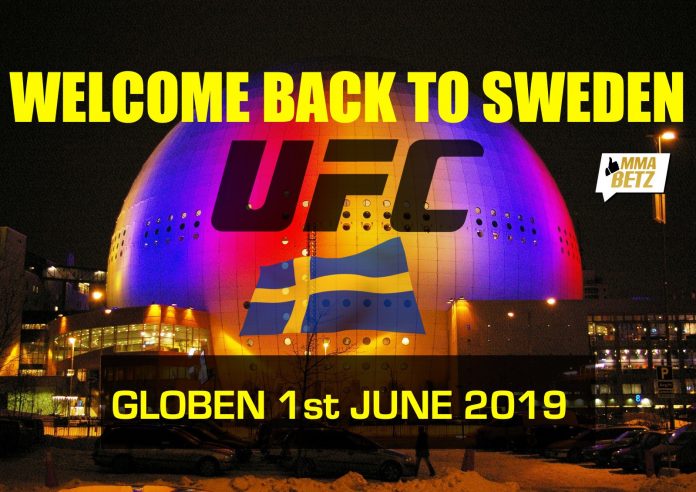 It is now confirmed the rumors  that UFC is coming back to Sweden for the 6th time and Stockholm Globe Arena for the 5th time on June 1st 2019. The one time the event was not held at Stockholm Globe Arena was when Alexander Gustafsson was fighting Anthony Johnson during UFC on Fox 14. That event was held at Tele 2 Arena, the 24th of January 2015.

This is what Per Nunstedt, head of Sport at NENT had to say:

This is the 6th time Ufc is visiting sweden. this is because of the skill of our countries athletes and the big group of hardcore fans that really have made this sport so popular.

Rumors are saying that the mainevent will be between the Swedish superstar Alexander “The Mauler” Gustafsson (18-5) and Corey Anderson (12-4). Earlier this year the Swede called out Corey Anderson who at that time was not ready to fight.
There are also rumor that Ilir Latifi, Jimi Manuwa, David Teymur and a few other Swedes will fight on this card.

UFC head of International market, David Shaw commented on the news like this:

We’re delighted to be returning to Sweden. Our Scandinavian fans are fantastic and have always shown up in their thousands to support their own local hero’s. There is such strength and depth in our pool of Swedish talent and we’re sure they’ll put on a show not to be missed in June.

Who do you want to see at #UFCStockholm? ??

Here's how to get your tickets early ➡️ https://t.co/LFE5rsJ2BI